We left Petit Martinique and headed to Clifton on Union Island, with only a brief stop in Petit St Vincent to change courtesy flags. Clifton was very crowded with laid moorings and with the wind blowing a good F5/6 we took the closest mooring to shore. After rowing in, clearing customs and buying an incredibly over-priced beer from the supermarket, we took advantage of having every bucket full of water. Hand washing our laundry in the cockpit and hanging it out all over the boat. What a glamorous lifestyle this is! Being close to shore the passing dinghies provided some distraction from the buckets and dirty laundry. All of a sudden screams of delight and incredulity from both a dinghy and the foredeck, as Ellie recognised some old friends from dinghy sailing in the UK- Pat and Jilly Blake.

They returned later that evening to give us a lift to the bar on the reef. Being up wind of us and our little dinghy we didn’t think we could get there under oar power alone. Everyone caught up over a rum punch as kite-boarders peacocked for the eager the crowds, jumping near clear over the island and applauding crowds!

Having cleared in at Clifton there wasn’t much to keep us there, especially with the lure of Turtles, Rays and good snorkelling just a short sail away. We set off the next morning for the Tobago Keys, with the wind still blowing a hoolie. We tried racing two other cruising yachts, a 56 footer and a 65. All was going well against the 56 until they cottoned on and trimmed their sails. We both decided that we would have won on corrected time. Around the top of Mayreau the wind was funnelling and blowing 30 knots, so we turned tail and spent the rest of the day in Saline Bay.

Saline Bay had some pretty good snorkelling along the cliffs bordering the southern edge, we had tucked right in and it felt like we had our own private bay. After an early morning snorkel we set off in calmer conditions, we made it into the Tobago Keys on two tacks. We decided to anchor close to the inner reef, a little exposed to the wind, but it allowed us to swim over to the reef. The reef was fantastic for wildlife, scores of rays and turtles, coral and tropical fishes. John even caught a glimpse of a shy shark as it threaded its way back to sea and away from the prying eyes of nosey tourists.

Photos from Carriacou through to St Lucia.

As the afternoon progressed the wind built and we decided to anchor between two of the islands in the group. Swimming on the anchor we noticed that there wasn’t much clearance under the keel. Looking at the tide tables online it seemed as if we were at low spring tides, so everything should be ok… By 9pm we had a kedge anchor out holding us in deeper water, and by 10:30pm the tide was pushing us side on to the wind and waves. We were pointing in a different direction to everyone else. On closer inspection the tide tables were for another island, some 60 miles away — always read the small print. John sat up until 1am in the brilliant moonlight keeping an eye on the anchors, the wind and the holding (and the rays which we could pick out against the sand bottom as the moon was so bright!). By then everything had settled down, the boat was pointing in the right direction and the tide had risen enough that we could sleep! In the morning we swam while we waited for enough water to pick the anchor up again. We managed to scare three squid and watch a turtle breakfasting on turtle grass.

We left for Bequia, which would be our longest passage since the trans-at. We spent the whole day on the same tack, easing or tightening sheets as the wind curved around islands. We sailed pass Cannouan - which according to The Times is where the billionaires go to get away from the millionaires. Not having showered in a real shower for a week or so, we’d probably not have been that welcome, despite having almost a full boat of clean(ish) laundry.

We passed Mustique, a semi-private playground for the rich and famous apparently. It is supposed to have good walking trails on the undeveloped parts of the island, but moorings are charged for a minimum boat length of 60ft. We had better places to go! Around the top of Mustique the waves had become horrible as they bounced around the islands and off the shallow ledge that we were sailing over. We eased the sheets to make it more comfortable, but it did mean motoring the last few miles in to Friendship Bay, our intended anchorage. Friendship Bay had a rather unfriendly set of waves that were creeping in, and in need of a good nights sleep we turned around, hoisted sails and sailed down wind round the corner and into the usual yacht anchorages of Admiralty Bay in the lee of the island. Admiralty Bay was a good spot to anchor in. We were recommended the southern end of Princess Margret Beach, close to shore and close to the point. There is a resident octopus who lives on the reef under the point, so it was nice to be so close to good swimming.

Bequia turned out to be a fun island to spend a few days on. We walked the 3 km back to Friendship bay to look at the whaling boat museum. Stocked up on fresh veg and some stores. Then we did holiday things like eating ice creams, drinking sundowners, swimming off the boat. We ended up spending 5 days in Bequia, the wind was still strong and it was really nice to be in a sheltered anchorage. Ellies friends had anchored near by and we went to dinner onboard their cat on our last night in the anchorage.

The next morning, bright and early we pulled up the anchor and set off for Martinique in one big overnight hop to make up some time. We made excellent time during the first part of the day and nearing the northern end of St Vincent decided to pull in for a siesta and set off again during the night, when we hoped the wind would be down a little. The drinks consumed the night before had no bearing on the captains decision what so ever.

Chateaubelair was a lovely spot to anchor, just off a beach lined with palm trees. Black sand on the bottom for good holding and crystal clear water. Halfway through the afternoon we started to get hit by gusts falling off the cliffs. They were pretty fierce and would flatten the water while also making a thin layer of mist above it. A local fisherman was caught out and ended up leaving his boat on the beach after trying to row against it for the better part of an hour and getting no where. The wind died down overnight and we left a very placid anchorage at 1am. Motor-sailing out of the lee of the island with the 3rd reef, in anticipation of the wind compression around the volcano at the northern tip of St Vincent. The forecast had been for 20knots gusting 27, sustained 30 as we poked our head out wasn’t a surprise. However it never dropped off, and by 6am it was gusting 40+. Being on watch was miserable in the dark, with big waves on the beam soaking you on a regular basis. The only consolation being that the sea was 27°C not 7° that it would have been in Norway. The rest of the day was spent fighting the current, wind and choppy waves so we could drop he anchor in St Lucia and have a rest. So much for making it to Martinique in one hop! In all the fun we’d had overnight combined with using the engine we’d let the fuel tank get low. As we approached Anse La Raye the engine started to drop revs. We’d managed to clog the filters, a classic mistake when you let the tank get low in bumpy conditions. We did make it into Anse La Raye without the engine cutting out completely, we tidied up and went to bed early.

The next morning we set about cleaning the pre-filters on the engine. Stupidly though we thought that we could get away without bleeding the fuel system. A 20 minute job became 2 hours of hand priming the engine and bleeding various inaccessible hoses. In the end a quick squirt of WD40 in the air intake pushed the engine back into life. Another lesson learned the hard way on Alcyone. We opted for a second good night sleep and a manageable distance to make the final passage to Martinique. So we set off up the coast on a short sail to Rodney Bay. Along the way we fell into a tacking duel with a sporty cruising cat, who were delightfully well matched and would have to duck each other on opposing tacks. We won the race by virtue of keeping our sails up further into the bay (thats how it work, we dont make the rules...well actually we do...but...).

Most of the cruising guides have large sections on security on the boat, we have to take fewer precautions as our dinghy really isn’t that attractive to thieves (though it is attractive) and we don’t have an outboard. However, when a local lad came up to the boat and claimed to have a Gambling 34 on the hard it all seemed a little dubious. Only 50 or so were built and they’re rare enough now in Norway - let alone St Lucia. Not wanting to be rude we kept on chatting about his boat, and it turned out that he did have a Gambling on the hard being fixed up. When you can discuss in detail the strange inner forestay tie down from deck to hull — you’ve got some experience of these boats. His boat was one of the originals from KMV too, having 4 drainage points in the cockpit.

We left Rodney Bay early and set off for Martinique, hopeful that we’d be able to make the 21 miles in a day. The wind was blowing a good force 5 and built through the morning as we closed on Martinique. During the passage we were routinely overhauled by bigger faster yachts, including another Alcyone. Eventually by mid afternoon we’d anchored in St Anne, sick of sailing in strong winds. We dinghied ashore to clear in, drink a cold beer and raid the Patisserie for baked goods. Priorities! 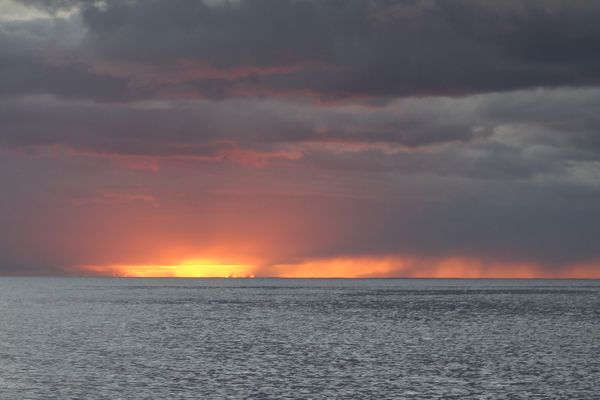 We arrived in Martinique with a list of jobs. First we needed to restock the boat with cheap tinned goods for our return crossing over the Atlantic. Tinned sausages and beans or cassoulet? 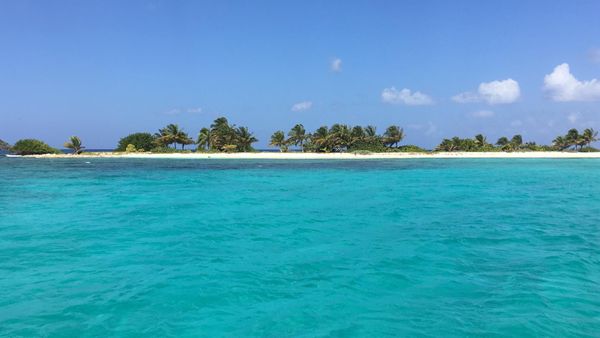 St. Davids turned out to be a great and terrible choice to make our landfall in. We tied-up at the dock and marvelled at how steady and still it was. After gathering our