St. Davids turned out to be a great and terrible choice to make our landfall in. We tied-up at the dock and marvelled at how steady and still it was. After gathering our papers we made our way to the deliciously, icy, air conditioned office. It was mildly disorientating to have to interact with other people and simultaneously try to take in surroundings that were far more complex than the expanses of ocean we’d become accustomed to!

From the office it would have been rude if we didn’t head directly to the bar for a cold beer… Bursting with condensation it tasted exactly as one could have hoped for. Showers, dinner out, a victory cigar and some rum, a whole un-interrupted nights sleep. All of it novelties. The next morning we set to cleaning the boat, checking in with immigration getting cash and more bug spray to keep off the mosquitoes from Ellie. It turned out that mozzies found her delicious. Oops.

We’d arrived late on Thursday and by Saturday afternoon we’d finished cleaning the boat, doing our laundry, topping up the fresh water and moved out into the anchorage - hopefully away from things that could bite. We’d even found time to catch a bus into St Georges and do some re-provisioning. Such a flurry of productivity after 18 days of snoozing or reading left us ready for a day off!

We hired a small car to do the must do things on Grenada.

So, St Davids was a beautiful location, quiet and a great place to re-introduce ourselves to civilisation after being away. We could have done without introducing ourselves to all the locals wildlife though. Under strict instructions from a strict doctor Ellie was forbidden from doing anything for at least a week. John spent his days making sure there was enough cold water in the fridge and fruit in the fruit bowl.

Seeing as we were in a place with extensive workshops etc. we took the opportunity to get bits fixed that hadn’t survived the TrasAt. There are worse places to be stuck than a boat yard, next to a pristine beach and 28 degree water to swim in. There was always an interesting boat to have a look at. Even one of the Classe 40’s we’d seen in Quinta Do Lorde was hauled out, with it’s massive 3m draught.

Soon enough Ellie was feeling better, we’d gotten away with it relatively lightly! We moved on doing gentle day sails for 2 or 3 days. We even managed to slide our way through the tail end of the Grenada Race Week fleet. We stopped at the main anchorage in St Georges and it was nice to be out of the murky waters of the mangroves into the crystal clear azure and turquoise waters of the west coast! After a quick provision and raid on the cash machine, complete with air-conditioned booth!, we set off for the underwater Sculpture Park.

The sculpture park was fantastic, jumping into the water to check the state of the mooring there was a large school of Sargent Majors swimming under the boat. From there on it got better, the sculpture were eerie concrete casting of humans with strange coral growths coming off them. Think the crew of the Flying Dutchman in Pirates of the Caribbean. There was a huge amount of coral, fishes and even the odd turtle that we terrorised by trying to take a photo of it. This is what we’d traveled 6000miles for! The last party boat left before sunset and we had the place to ourselves - except the jumping tuna. After breakfast the next morning we went for our third swim and finished just as the first tour boat arrived - time for us to leave.

Off we set for Carriacou - but with an over night stop in Ronde Island - white sand beaches and uninhabited hard to say no really. The sail up was a bit of a slog as we’d not anticipated as much current and the seas were a little more lively than we’d expected. So many days in quiet anchorages had left us a little rusty at getting the boat ready. Soon the floor was covered in anything we’d not stowed. It was a treat to be sailing again - Ellie on the helm and John crewing, racing anything that had a scrap of sail up. Chalk and cheese compared to the Atlantic crossing - where the auto pilot did all the hard work and our sails were always set on the conservative side.

We gave Kick ‘em Jenny a wide berth, didn’t want to be involved in an unexpected volcanic eruption and arrived in the anchorage at Ronde just before sunset. With enough time for a quick swim, tidy up and sundowners before the sun set. We’d been spoilt at the sculpture park and the underwater life at Ronde was not enough to keep us there, especially as the wind had shifted during the night, going slightly south of east. This gave us a much gentler sail to Tyrell Bay in Carriacou in one tack. We nudged our way into the crowded anchorage and found a scrap of space within rowing distance of the beach. Being a Sunday not much was open - one bar with wifi and a cold beer - but back to the boat before the mosquitos came out!

The main attraction at Carriacou was on the other-side of the island at Windward where they still build traditional boats on the beach. The 70ft sail-trading sloop there was to be launched in a month - she was fully planked and decked with the capping rails going on when we visited. Fascinating to see such a big boat being built on a beach between mango trees! Life in Tyrrel Bay was slower than on the main island of Grenada, life at Windward was little more gentle than Tyrrel Bay. Even the dog snoozing under the tree on the beach contemplated not getting up for the scraps he was offered from our Rotis.

We checked out of Grenada the day before the 3 day weekend and headed around the top of Carriacou to the anchorage at Petit Martinique. The wind had built and we had a rolly nights sleep. In the morning it was blowing a fair whack through the gap between Petit Martinique and Petit St. Vincent. So much so that we added a few more dents to the water and fuel dock as we took on more water. Not feeling happy about leaving the boat at the dock in these conditions we decided to skip a visit to the island. Opting instead for the 300m motor over to the lee of Petit St. Vincent. Like that our visit to Grenada was over - it to has joined the list of places we need to come back to! 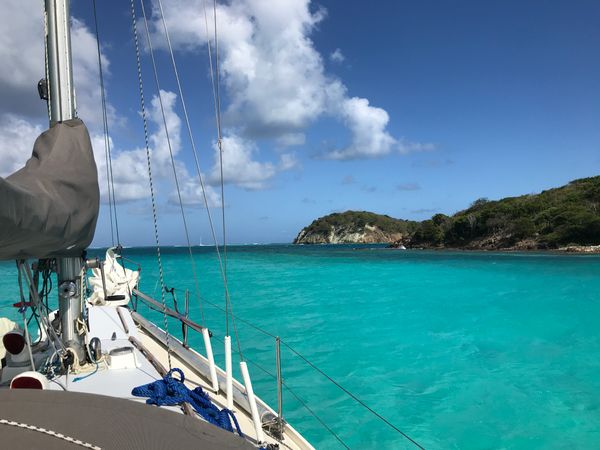 We left Petit Martinique and headed to Clifton on Union Island, with only a brief stop in Petit St Vincent to change courtesy flags. Clifton was very crowded with laid moorings and with 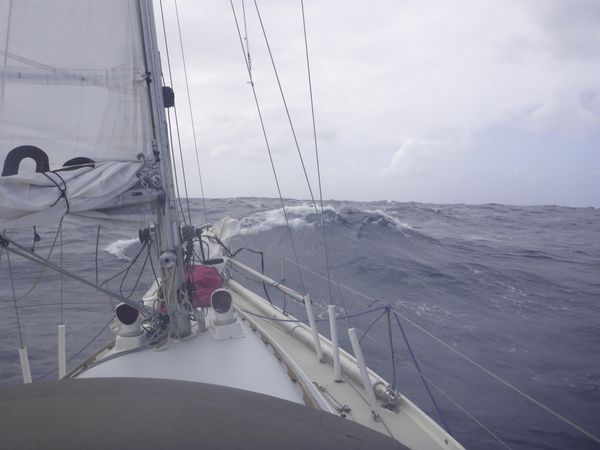 Our transatlantic seems an age ago now. It was such a massive hurdle but actually ended up being a bit of a breeze…which is exactly as I like it. People have asked