We arrived in Martinique with a list of jobs. First we needed to restock the boat with cheap tinned goods for our return crossing over the Atlantic. Tinned sausages and beans or cassoulet? The VHF had been playing up and we had heard that there was a good workshop in Le Marin. Le Marin had every single type of boat related trade you could imagine.

After a day at St. Anne we headed into Le Marin to take a slip at the marina and do "productive stuff"... Also showers. As we slowly motored towards the marina the heavens opened and we had a complete white out. Our oilies had been needing a thorough rinse since the night sail to St Lucia, and showers suddenly didnt seem so urgent. Being a small boat we ended up at the far end of the marina right out of the way and close to the mangroves. Martinique was in the middle of a Dengue outbreak — we were immediately keen to move on considering Ellie's irresistible appeal to mozzies.

After proper showers we headed out to scope the supermarkets and what not. The VHF workshop gave us some tips on troubleshooting (in an incredulous way that suggested we were idiots and the fault was our batteries). Having trouble shooted as suggested and reach the original concusion that the radio was at fault we headed for an evening at the laundrette where we made our grand plan of attack for the supermarkets. Early the next morning we started to tackle the list of jobs. At this point if this was a Vlog we would have an exciting shopping montage with stupidly large amounts of tins and nicking a trolley to get stuff back to the boat...but it isnt so you will just have to imagine it like an all day supermarket sweep.

In the evening we sat down to a much deserved celebratory meal out. The boat was sitting an inch or two lower in the water, and we probably have enough food to last until Christmas- which considering current circumstances is very good!

Having convinced the electrician that the VHF was really broken we left it with them to fix , but that wouldnt be until after the weekend. We decided to head up the coast and into a nicer anchorage opposite Fort-de-France where we could catch a ferry into town. A small reminder of home. On the way we stopped off at Anse Noire, one of two small anchorages next to each other, one with a white beach and Anse Noire with a black beach. That evening after the charter boats left we had a good snorkel. The next morning we dived in to try and see more, but an influx of rather stingy things had arrived over night. We didn’t last long in the water!

Bright and early Monday morning we caught the ferry into Fort-de-France. It was slightly confusing, the majority of shops were shut. Eventually it dawned on us that it was Carnival, one too many shop assistants with glittery body paint gave it away. We were kicked out of the Hypermarket at 1pm and the whole of Fort-de-France was getting into the party mood and everything would be shut for 3 days. We hadn't really factored this into our planned stay in Martinique.

During carnival we moved to Casse Pilot, a small beach town on the west coast of Martinique. It was one of the first french settlements on the island and hasn't been invaded by tourist or resort hotels yet, it was lovely and peaceful! Carnival goers would gather for the afternoon ferry in various flamboyant outfits normally including a TuTu, it was fun to watch but neither of us fancied braving the crowds in town.

The day after Carnival we caught the ferry, then a local comunal taxi back to Le Marin to collect our now working VHF. We breathed a sight of relief that it was only €75, and not a whole new radio. That afternoon we visited a few museums that were now open, and the magnificent Bibliotheque Schoeler, a beautiful victorian cast iron framed library, looking very much like a temple to knowledge. The Casse Pilot ferry took a detour on the way back, and circled a pod of dolphins hunting in the sunset, a very good end to a good day.

Friday, we sailed up the coast to St. Pierre with the intention of checking out the following day. Our plans were thwarted by the restaurant owner going on holiday with the keys to the checkout computer. We’d have to wait for Tourist Information to open on Monday morning. Such a hardship to have to spend another two days with easy access to fresh baguettes, croissants and pain au chocolate. We saw the sights and visited the museum dedicated to the devastating volcanic eruption in 1902 which flattened the town and killed some 30,000 people. The church bell gave an idea of the force of the explosion, it was squashed flat and torn like a bit of playdough.

We were queuing up at the Tourist Information at 7:45 Monday morning keen to get cracking. Martinique had started off as a bit of culture shock, France in the middle of the Caribbean. With the combination of carnival and boat work we left feeling like we had spent far longer than planned there but we’d hardly seen any of it. Still at least we got to the Decathon. 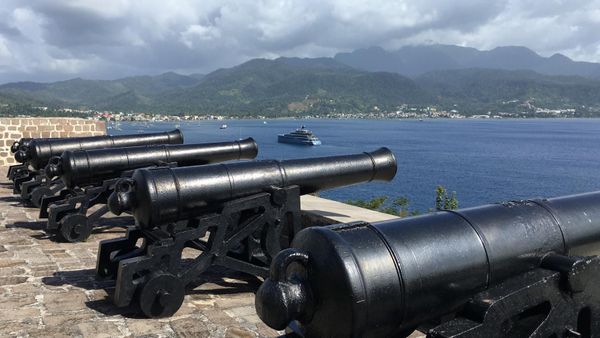 We were keen beans to leave Martinique waiting for the checkout computer to open in St Pierre at 7:45am. Despite some queue-jumpers getting in the way we were ghosting out of the

We left Petit Martinique and headed to Clifton on Union Island, with only a brief stop in Petit St Vincent to change courtesy flags. Clifton was very crowded with laid moorings and with