How we managed to get it so completely wrong is a question we're still pondering. The morning we left Nazaré the weather forecast we downloaded gave us maximum 15 knots all down wind to Madeira. The first day potentially a frustrating 5 knots of wind. Almost enough to sail in.

Imagine our surprise when leaving the harbour there was 15 knots on the nose. Still a bouncy headsail change and we were all set, maybe it was a sea breeze...? Not long after, I (John) discovered why the seasickness medication said not to drink alcohol - the cheeky lunch beer before we left was deeply regretted as I hung over the side of the boat exorcising lunch and breakfast. 24 hours in we got a message that a cold font would pass over the next day. Maximum 15 knots down wind all the way? No chance.

Saturday morning, the main came down to 2 reefs, the #2 headsail was swapped for the #3 and eventually the main came down completely. By midday the jib was wrestled down and  storm jib was set, we slowly reached backward on our track waiting for the front to pass. It seemed a little excessive to have only the storm jib set in conditions that didn't seem to require it completely. Until a squall saw our rather unreliable wind gauge read a steady 38 knots:  The sea flattened, rain drops the size of peas soaked the boat and long streaks of rain and froth  lay on the surface of the sea. The storm jib didn't seem so unnecessary then. Eventually with the front came the wind shift we were promised for the whole trip. Only a tad more wind than we'd anticipated.

Early Sunday morning in the new wind we started to set a bit more sail, first the #3, then a double reefed main. Like that it stayed for the rest of the trip - reaching in 20 knots towards our destination. The only excitement was the occasional thundery rain squall that saw us dropping the main and running off with the wind. The boat log rarely gave us speeds above 5 knots, but the GPS was regularly over 7kts: we'll draw straws in Porto Santo to see who gets to go for a dive and clean the bottom.

With the boat ripping along the Wednesday morning arrival soon became Tuesday night, we contemplated slowing the boat down neither of us fancied another night time arrival. As the sun rose on Tuesday morning the faint outline of Porto Santo could be seen between rain clouds, if the boat hadn't already been at hull speed we would have shaken the reefs in the main to get there before sunset. 20 miles out, 1 bar of phone signal, the modern mariners sure fire sign the land is near. The boat blasted on, we all wanted to get in before nightfall!

By 1700 we were neatly sandwiched in a very snug berth in Porto Santo marina, having been directed in by the fellow cruisers. The boat, us, our clothes and all the lines were caked in salt from the wild ride. We quickly tidied the deck, ate dinner and slept until 5am. When the body clocks decided it was time to eat and go on watch... good job the snack box hadn't been put away. 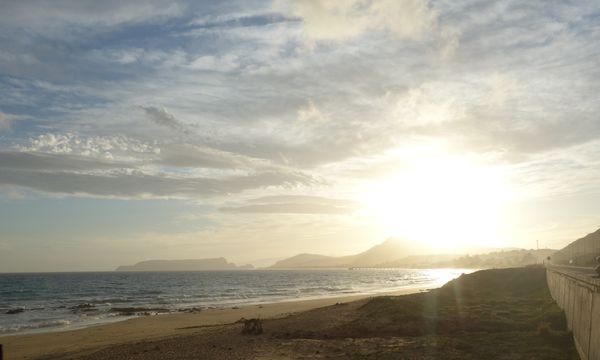 After the somewhat traumatic trip from Portugal it was a relief to be tied up in the marina and surrounded by such a friendly and welcoming bunch of fellow sailors. We spent a 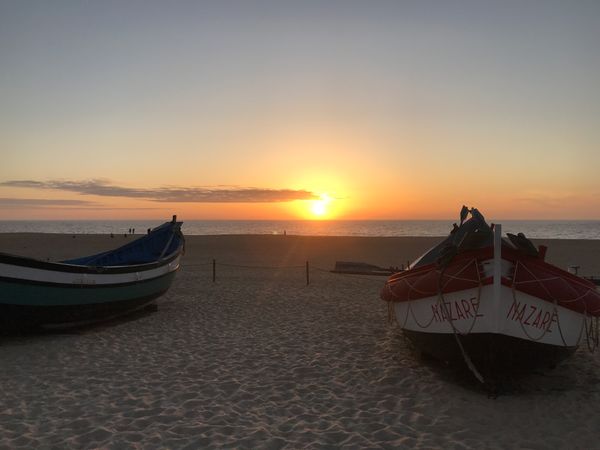 Nazaré turned out to be quite a pleasant surprise. Before we arrived the only thing it had going for it was it's day and a half sail from Porto and an "all weather"