We made landfall in Cabo Verde at Ihle do Sal in the North East of the island group, anchoring at the small town of Palmeira. Here we could check in, re-provision and top up our water from the town Fonteria (the communal tap piped from the desalination plant that the whole village seemed to use...for a fee). Our hunt for more fuel for the stove (meths/denatured alcohol) took us to the "big town" of Espargos,transport was the back of a pick-up  truck Aluger (communal bus/taxi).

Espergos had a bit more going on, and had clearly been tarted up a bit for the tourist groups who visit in large groups from the resorts on the south end of the island. Apparently these tourists are warned not to wander off on their own for fear of muggings etc, but we never had any problems other than people enthusiastically trying to sell us tat. The biggest pain was these groups turning up at the cafe just before you have ordered lunch so you had to wait for ages for them to be served first!

Palmeria was a pretty crowded anchorage so after a couple of days sorting ourselves and the boat out we headed south one bay to anchor, swim and relax. The challenge of CV is that the police keep you boats paper work in the first town you arrive at on any given island, so you in theory have to return to that town to collect your papers before leaving any island. This makes for some interesting logistics, but we later learned we could push this a little within reason. Anyway, having collected our papers we headed south to Boa Vista: the neighbouring island.

Like Sal, Boa Vista caters a lot to European tourist who want a beach holiday in the sun. Boa Vista seemed to be more for the active set, with kite surfers and wind surfers bombing about in the anchorage. With a shallow reef extending a long way out from the town of Sal Rei we had to anchor a fair way out. Still the inconvenience of a long and wet (in the chop) dinghy ride was compensated for by the good swimming from the boat and the gorgeous reef just 150m away! In Boa Vista we found a great little museum which had just opened a few weeks earlier, with load of information about the early Portuguese settlements, defences against pirates such as Sir Francis Drake, and the importance of the islands for the slave trade and sailing ships carrying these poor people from Africa to the "new world". Having handed in our papers to the Police we upped anchor and went to explore some of the coast of the island.

It seems Boa Vista's coast is just one long continuous white sand beach. With chart data limited and often dating from the 1800s we had to rely on our cruising guide for recommended anchorages and then use satellite maps for the fine detail. This worked surprisingly well provided the satellite photos were taken on good day! We ended up anchoring off the beach at Curral Velho and had a pretty rough nights sleep in the waves. In the morning we swam ashore, as a strange southerly swell made a dinghy landing ashore impossible. On the beach we were the only souls in site with no towns or resorts about and only the odd fishing boat motoring by to the fishing grounds. We walked up the beach to an abandoned settlement and salt pan we had seen- apparently the well had dried up so life had become impossible without a water supply. We certainly learnt the value of water in the Cape Verdes, where the climate is so arid that most of the islands rely on desalination plants and water is paid for by the litre.

After our adventure to the bouncy anchorage we headed back to Sal Rei to  collect our papers and move on. With the south coast anchorages so rough we didnt feel it was worth staying. Our next destination was the island to the North West, Soa Nicolau, with lots of bays and inlets to explore We hoped to have more luck here! 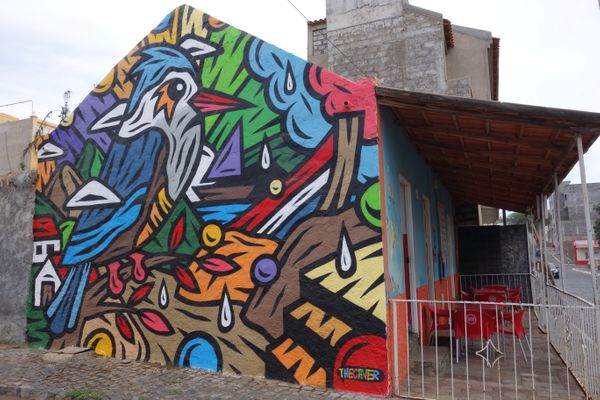 8th - 28th December The night crossing to Sao Nicolao was unexpectedly fast - we arrived at 4am to a coast that was so dark there was no discernible difference between sea, land

We’re currently sitting in a bar stealing WiFi waiting for the siesta to end. Then we’ll collect our deposit, slip lines and head off from Mindelo over the Atlantic. We’ve

Alcyone
—
Landfall in Cabo Verde: Ilhe do Sal and Boa Vista
Share this